An Update On Alaska's Housing Market: Delinquencies and Foreclosures; Sales and Inventory

Editor's note: Whether you are already a homeowner or are trying to purchase your first home, you have likely felt the economic impact of COVID-19. While many families are struggling to keep up with mortgage payments, Alaskan homeowners have proven less likely to face foreclosure than the rest of the country. And with home prices hitting record highs, home sales are still on the rise.

Mark Edwards, EVP — Chief Credit Officer & Bank Economist at Northrim Bank, sheds light on why in his recent article published in the Alaskanomic's Blog. In the excerpt below, he explains the current state of mortgage foreclosure rates in Alaska and the challenges facing first time homebuyers.

2020 was a challenging year for the global economy as health policies led to significant disruption in normal business activity. It is counter-intuitive to have a year where payroll jobs declined by 8.5% and gross state product fell 5% in Alaska, yet per capita income rose over 3% and housing prices and sales activity increased substantially. This was only possible because billions of dollars in federal stimulus money reached Alaska and helped support businesses and individuals through the most challenging times.

Many people across the country took advantage of mortgage forbearance plans available from lenders to delay payments or pay interest only on their homes. Until they catch up on past due payments these loans will appear delinquent because they are still behind according to the original terms of the mortgage. 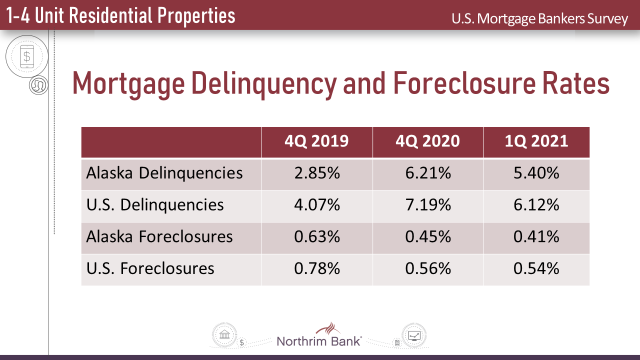 The low interest rate environment has been a major factor in rising prices. According to the Federal Reserve Bank of St. Louis, the average 30 year fixed rate mortgage in the U.S. hit all-time record lows last year. Rates began 2020 at 3.7% in the first week of January and fell one percent to 2.7% by the end of the year. Rates began to rise in the first quarter of 2021 and finished March at 3.2%. However, in April they declined slightly to 3%.

In Alaska, the number of building permits issued for new home construction were 1,680 in 2019. According to the U.S. Census Bureau this fell 15% to 1,420 housing units in 2020. This does not include building in unregulated parts of the state.

Across the country, the prosperous baby boomer population is living longer and often keeping a second cabin or vacation home. This housing inventory is not turning over at the expected rate, as the even larger population of millennials are finally becoming home owners. The Federal Home Loan Mortgage Corporation, commonly known as Freddie Mac, determined that the nation was undersupplied by about 2.5 million homes pre-COVID. Now that has grown to 3.8 million homes in April of 2021. The high cost of building has constrained construction levels and also made the price of a new home out of the reach of hundreds of thousands of first time homebuyers.

To read the full article — and other news, analysis, and commentary on Alaska’s economy — go to Alaskanomics.com. To access information and resources for Alaskan Homeowners, click here.